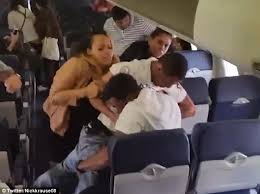 Drama unfolded on board an aircraft in Dallas, United States of America (USA) when a fistfight broke out between two male passengers on a Southwest Airlines flight getting ready to depart to Los Angeles, California.
In the March 2, 2018 incident, witnesses claim a man began arguing with flight attendants regarding overhead bins on the aircraft, Fox 4 reported. When asked to deplane, the man refused and soon afterward the pilot asked all passengers to exit.
According to witnesses, another male passenger intervened, asking the man to deplane so the flight could continue to Los Angeles. The man then spat on the other passenger, apparently sparking the altercation.
As evident in the 20 seconds of footage captured by an anonymous Snapchat user, who tagged the clip with the hashtag #WalmartOfTheSkies, the pair proceeds to duke it out as fellow travellers chaotically move out of the way.
The spat eventually ended after the two men were separated, Fox 4 reported. The instigator was then removed from the aircraft, and the brawl ended up delaying the trip one full hour.
Though Southwest Airlines did not immediately return Fox News’ request for comment, they did offer the Daily Mail the following statement:
“On March 2, Southwest Airlines flight #8 scheduled Dallas Love to Los Angeles was delayed departing due to an altercation between two passengers. The passengers involved were deplaned and local law enforcement took over from there. The safety and comfort of our Employees and passengers is our top priority,” a company spokesperson said.
Source: Fox News