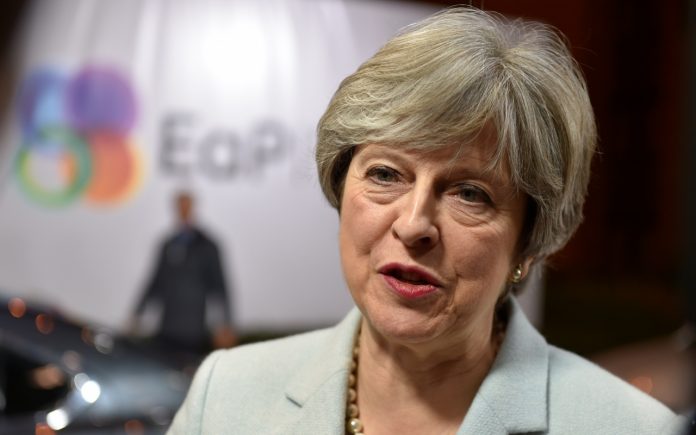 The Christian Association of Nigeria (CAN) has slammed the British Prime Minister, Theresa May on her position on same sex marriage.

While picking holes in May’s position, CAN enjoined the Federal Government to disregard the counsel of the British Prime Minister on same sex marriage.

CAN position was contained in a statement issued by Pastor Adebayo Oladeji, the Special Assistant on Media and Communications to the CAN President, Dr. Olasupo Ayokunle.

The position of CAN is coming on the heels of what May said at the just concluded Commonwealth Head of Government Meetings in Westminster, London.

May had while speaking at the first joint forum at the Commonwealth Head of Government Meetings in London said there should be no laws criminalising same-sex relationships across the Commonwealth.

Her words: “As the UK’s Prime Minister, I deeply regret that those laws were introduced. As a family, we must respect one another’s cultures and traditions, but we must do so in a manner consistent with equality, as it is clearly stated in the Commonwealth charter.  Nobody should face discrimination or persecution because of who they are or who they love and the UK stands ready to help any Commonwealth member wanting to reform outdated legislation that makes such discrimination possible.”

According to the statement obtained by Maritime Bits Reacting, the CAN President noted that the position of May was ungodly, satanic, reprehensible, condemnable and should be rejected by all right thinking people globally, especially in Nigeria.

He said that Nigerians had unanimously resolved to do away with same sex marriage just as he added that Nigeria cannot return to its vomit mainly because of a view canvassed by the British Prime Minister.

His words: “If we may remind the British authorities, the same-sex marriage contradicts the position of the scripture and any human law that contradicts the Bible cannot stand. God is the author of marriage and He stated it clearly that it involves a man and a woman. In addition, The Bible states: ‘A man will leave his father and his mother and he must stick to his wife and they must become one flesh.’ (Genesis 2:24).

“Jesus our Saviour confirmed that marriage should be ‘male and female’, Matthew 19:4. The plan of God for marriage is very clear. Men and women are designed to complement each other so they may be capable of satisfying each other’s emotional and sexual needs and of providing children. The Bible condemns homosexuality as an immoral and unnatural sin. Leviticus 18:22 identifies homosexual sex as an abomination, a detestable sin.

“Romans 1:26-27 declares homosexual desires and actions to be shameful, unnatural, lustful, and indecent. First Corinthians 6:9 states that homosexuals are unrighteous and will not inherit the kingdom of God. Since both homosexual desires and actions are condemned in the Bible, it is clear that homosexuals ‘marrying’ is not God’s will, and would be, in fact, sinful. This is the position of the Christian Association of Nigeria (CAN) and any government that dares to make same sex marriage lawful is not only asking for the wrath of God but that of the Christians and other well-meaning Nigerians. The fact that British authority or all countries of the world practise or allow it does not make it right. Whatever that is ungodly is unacceptable to CAN and to Nigerians”.

Continuing, the CAN President said: “The British Prime Minister should take a lesson from all animals in the bush. As wild as beasts may be, they never contemplate till today indecent sexual relationship of same sex. Same sex marriage is sodomy and it was one of the major reasons God overthrew Sodom and Gomorrah in the Bible. No human right should set aside the commandment of God. Man cannot be God to himself/herself.

“Same sex marriage is not acceptable in Nigeria because it is human madness and CAN is confident that our government will never contemplate introducing it. For the sake of emphasis, CAN stands by the moral situations according to the Holy Book. We contend that on no account should our government bow to pressure by making Nigeria capitulate while embracing strange culture that allows barren amorous relationship between same sex, not in tandem with mother nature. The sovereignty of Nigeria allows it to stick fervently to its good law, morals and values and to reject any influence by strange cultures from other climes that are anti-human”.