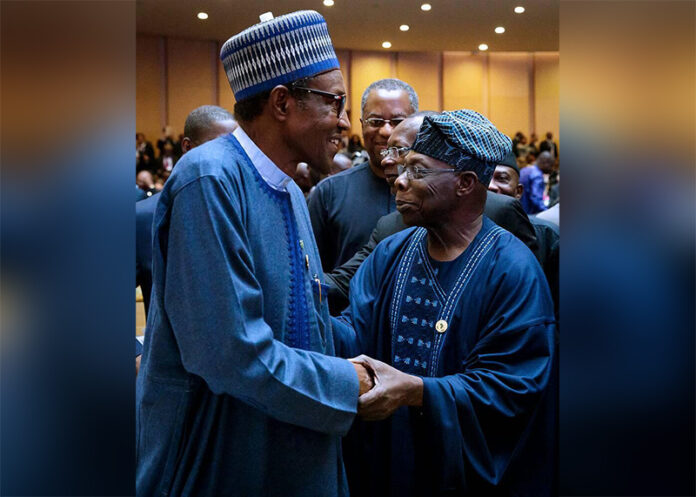 Former President Olusegun Obasanjo has said that the removal of President Muhammadu from office in the 2019 presidential election will favour the aspiration of the Igbo to occupy the number one seat in the country.

He therefore enjoined the people of the South-East geo-political zone to vote out Buhari in the 2019 general elections “in their own interest.”

Speaking at a meeting of the Coalition of Nigerian Movement (CNM) in the Anambra State capital, Akwa, Obasanjo said the Igbo would be the most beneficiary in Buhari’s ouster in the polls.

He asked the Igbo not to believe the promise that the Igbo would produce the President in 2023, describing it as “a grand deceit and evil machination.”

Speaking through the South East convener of CNM, Dr. Okey Nwosu, Obasanjo asked the people of the zone to “collectively work with the CNM towards ousting Buhari from office in the 2019 general elections”.

Obasanjo slammed the ruling All Progressives Congress (APC) government of perpetrating “carnage and wanton destruction of lives and property across the country.”

His words: “The meeting is a wake-up call for Nd’Igbo to dump APC and collaborate with CNM which is the best alternative for their rescue from poverty, hunger, recklessness and ethnic cleansing in the hands of the Hausa/Fulani marauders. Every Nigerian leader is very much embarrassed with the state of the nation where people are attacked, killed, raped and made refuges in their own homes.

“Political leaders must advocate action against these senseless killings and seek how to design a new democratic action plan to ensure we take care of this conundrum democratically, and say, ‘enough is enough’. If unchecked, these unethical activities will lead to the destruction of the country. It does not augur well for Nigeria’s development.”

Continuing, he said: “The objective of CNM was mostly on how to “sack Buhari from Aso Rock in 2019 and ensure that a visionary government is elected. Nigeria’s eminent personalities, including Generals Yakubu Gowon, Ibrahim Babangida and T.Y. Danjuma have all spoken and condemned the killings and destruction in the country”.

According to Obasanjo, if these people can say that the nation needs to be saved from these calamities, the South-East geo-political zone must add their voice to the clarion call. The CNM had mobilised no fewer than five million Nigerians to realise its objectives in 2019.