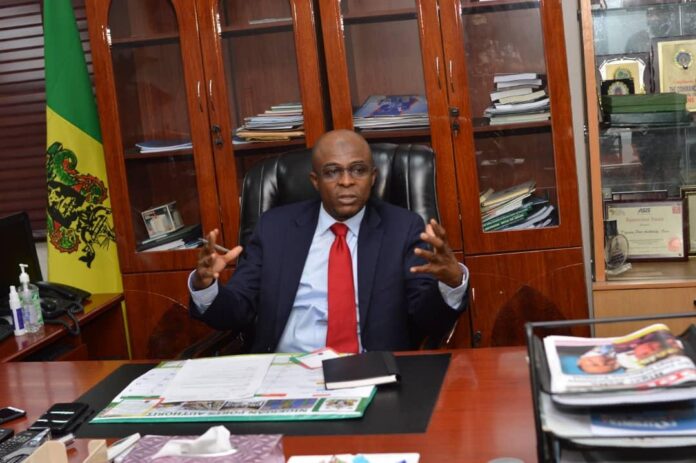 A new leadership has emerged in Onne Port Complex, Rivers State. To this end, the Port Manager Alhaji Alhassan Ismaila Abubakar has been replaced by Dr. Abubakar Dantsoho.

The change in the leadership of the Onne Port Complex was sequel to what the Nigerian Ports Authority (NPA) called “shufflement and reassignment” approved by its Managing Director, Ms. Hadiza Bala Usman recently.

Welcoming Dantsoho at the Conference Room NPA, Federal Lighter Terminal Onne, Abubakar represented by Agbo, expressed satisfaction for the new posting saying  that the only thing constant in life is change.

Agbo who is also the Chief Medical Director, Onne Port maintained that such changes seek to strengthen the operations of the NPA.

According to him, we are happy to have you at the port and you can see that in the level of attendance by Heads of Departments (HODs). It goes a long way to show how happy we are to receive you as the new Port Manager, Onne Port Complex.

Dantsoho in his response expressed appreciation at the warm reception accorded him while thanking the NPA Management Onne Port and other stakeholders for their excellent performance even as he applauded the Heads of Departments for their wonderful contribution in making Onne Port a revenue hub for the nation.

His words: “Onne Port Complex is a thriving port competing favourably in revenue generation next to Lagos Ports.”

Dantsoho used the occasion to laud Abubakar for his contributions and achievements while in office as the Port Manager just as he called on the HODs, staff and port users to extend the co-operation accorded his predecessor to him so that Onne Port Complex can be taken to greater heights.

The new helmsman enjoined the workers to always be  team player, noting that such is key to achieving a remarkable progress.

According to him, team work encourages all to learn from one another. Onne Port Complex has made remarkable progress in areas of enhancement of efficiency, improved workers welfare and operational capabilities among others.

He noted that NPA Onne is a success story and appealed all to work harder to boost more revenue generation even as he urged all to embrace Usman’s qualities of dedication to work, unwavering courage, sympathy and understanding while describing her as an epitome of professionalism.

The new Port Manager said his vision amongst others is to improve the revenue generation of Onne Port Complex saying that NPA management has invested a lot of funds to ensure its improvement in efficiency in the area of facilities, equipment and channel dredging, besides generating more revenue.

He assured that under his administration, Onne Port Complex would be taken to a higher level.

The Chairman, Maritime Workers Union of Nigeria (NWUN), Onne Chapter, Comrade Jonah Chukwu in his remarks welcome Dantsoho into his new office even as he pointed out that Onne Port is a family where family bond is established leading to team work.

He noted that as a new Port Manager, Dantsoho was inheriting assets and liabilities.