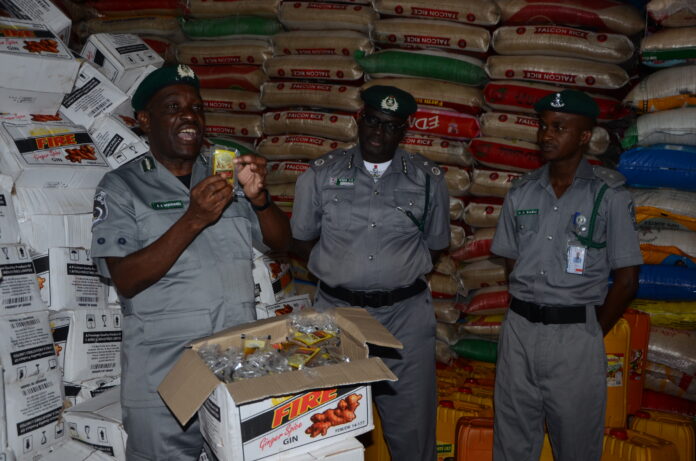 The Nigeria Customs Service (NCS) has rake in over N0.5 billion in July 2018 from its operations in Nigeria’s premier international border, Seme.

Similarly in the same month, the service also recorded 91 seizures with a duty paid value (DPV) of over N130 million.

According to Aliyu, the revenue generated by the service represented about 85 percent of the revenue target given to the command.

In the same vein, the CAC revealed that the command made what he called “a remarkable seizure of fire spice gin” with a 42 percent concentrate of alcohol.

He revealed that over 2000 cartons of the said items were found concealed in a truck with the intention of evading customs control just as he pointed out that the seized item has a DPV of over N13 million.

He stressed the commitment of the command in securing the border against illicit trade that is harmful to the health and wellbeing of the citizenry.

Based on the World Customs Organisation (WCO) emphasis on transnational border control management and the technical simulation/handover of the Joint Border Post by the Economic Community of West African States (ECOWAS) Commission at Seme, the CAC disclosed that the command is poised to conduct its assigned responsibilities with discipline at all levels.

According to him, it will also ensure border security and seamless facilitation of legitimate trade, in tandem with the executive order on the ease of doing business.

Abdullahi, an Assistant Superintendent of Customs ASC 1, also quoted the CAC assuring that the Joint Border Post will serve as a platform that will simplify NCS procedures while increasing co-operation, collaboration, coordination and harmonious working relationships at the border post.