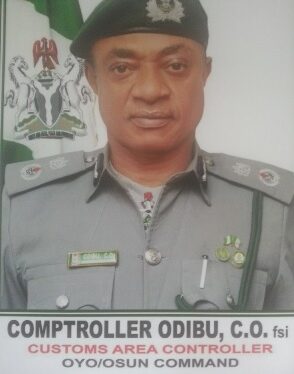 The Customs Area Controller (CAC), Oyo and Osun Command, Comptroller Christopher Ogar Odibu has said that he does not sleep so that smugglers and other criminal elements do not perpetrate their atrocities in the area under his watch.

Saki and Owode which are under the watch of Odibu are notorious for smuggling activities across Nigeria numerous legal and illegal border routes.

In a chat with Maritime Bits in the command headquarters in the Oyo State capital, Ibadan, Odibu stated that apart from his not sleeping so that he can have an all-round check on the activities of smugglers and other criminal elements in the area under his supervision, he also disclosed that he has mapped out strategies to curtail their activities.

“I have effectively blocked all the leakages in Oyo/Osun Command. We have divided the area into units and put men on ground so that nothing slips through our fingers. If you are in doubt, ask people outside this place and they will tell you the truth. That is the basis of some of the hues and cries over the activities of the command in some quarters”, he said.

The Customs Chief stated that the strategies he has put in place have made the command a no-go-area for smugglers and other criminal elements in the society.

Apparently aware that he still has a lot of hurdles to cross, he said: “We are not doing it alone. We are collaborating with the Nigerian Army and other government agencies so that we measure up in our anti-smuggling campaign no matter what it takes. I am just coming back from a meeting with the top echelon of the Nigerian Army. We have also met with the Department of the State Security Service. We need information. We need intelligence. We need the co-operation and support of all stakeholders in this war against smugglers and other undesirable elements”.

As part of his training, discipline and showing leadership by example, Odibu said he reports to work daily by 7:30 am.

“If you do not believe what I am telling you, ask the people on the street leading to this office. They know when my vehicle passes through their houses every morning. It is part of my training and discipline as an officer of the Nigeria Customs Service. As a result, my officers and men have taken a cue”, he said.

Impeccable sources told Maritime Bits that in spite of Odibu’s efforts in stepping up the anti-smuggling campaign of the NCS in the command, he has been on receiving end of smugglers antics and tactics as the NCS Headquarters, Abuja was said to be on his neck with the Deputy Comptroller General (DCG), Enforcement and Investigation, Abubakar Dangladima calling him on more than one occasion to draw his attention to the free passage of prohibited items through his command.

It was learnt that this has put Odibu and his officers and men on their toes as they grapple with fresh measures to put the smugglers at bay.

Odibu who hails from Cross River State, read History from the University of Calabar. He joined the NCS in 1987 and has served several capacities in the service.

Appointed late last year as the CAC, Oyo/Osun Command, Odibu was prior to his appointment, the Comptroller Human Resources Department (HRD), NCS Headquarters, Abuja in 2016 from where he was transferred to Ikorodu Lighter Terminal Area Command in 2017.