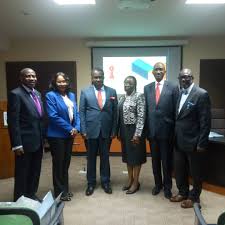 In order to boost the economy and make Nigeria a preferred destination in alternate dispute resolution (ADR) in the Africa, especially in the West and Central Africa Sub-regions, arbitrators have called for better management and resolution of disputes in the maritime industry.

They argued that when resolutions seat well with parties involved, it would go a long way in making Nigeria a reference point in ADR as regards the shipping sector of the economy.

They stated this at the just concluded 9th practical maritime dispute resolution seminar organised by the Maritime Arbitrators Association of Nigeria (MAAN). The two day seminar with the theme “Growing Maritime Arbitration in an Emerging Economy” took place at the Lagos Court of Arbitration Building, Lagos.

While giving an overview on “Arbitration and the Choice of Law”, Ananaba drew attention to conflict and choice of law issues in arbitration agreements and how they affect the enforcement of arbitration awards.

The senior legal practitioner ended his overview by recommending some steps that parties could take to prevent choice of law problems in arbitration.

Mordi on his paper titled “Issues in Multi Party and Multi Contract Arbitration”, highlighted the impact of both on privacy of contract and party autonomy, even as he pointed out that the major issue in multi-contract arbitration is the tendency for inconsistent awards arising from the different arbitrations and attempted to proffer potential solutions to the issue.

Mordi who is a partner in Aluko and Oyebode and Company identified the main issue in multi-party arbitration as the selection of an arbitrator or constituting an arbitral panel in situations where each of the different parties to the contract claims its right or entitlement to appoint an arbitrator.

As a way of addressing the challenges arising from it, he recommended some potential solutions to this issue.

In his paper on the Finality of Arbitration in Nigeria-Myth or Reality, Ojo reeled out the various arguments of proponents on both sides and concluded that the debate would need to continue for some more time in the hope that in the not too distant future, a definite answer would be found.

Ilogu in his paper titled “Ship Arrest and Maritime Lien-The Nigeria Experience” reminded participants that in Nigeria, maritime claims are generally divided into general and proprietary maritime claims any of which could lead to the arrest of a ship.

The senior legal practitioner who is also the principal partner, Foundation Chambers alsodelved into the meaning of arrest, background to the arrest of a ship, arrest process which includes the issuance of the warrant of arrest, pre-condition for arrest, and the application for an arrest order and its effect.

Omole whose paper was on “Lay Time Demurrage Disputes in Voyage Charter: Some Fundamental Issues”, discussed among other things, the general principles of lay time and demurrage, its commencement, interruptions and exceptions and how to minimise charter party disputes.

On his part, Ojutalayo who spoke on “Dispute Related Issues in Charter Parties: A Fuller Consideration”, covered all areas of charter parties including its basics just as he also discussed some of the issues that can generate disputes.

These include improper handling of cargo, non-compliance with the required condition of the vessel, cargo characteristics and conditions upon loading, brokers’ commission, issues regarding off-hire events in the case of time charters and lay time/demurrage in the case of voyage charter.

Odibe who spoke on “Issues in Terminal Operations in Nigeria-Operator’s Perspective” highlighted the gains of port concession and the challenges being faced by terminal operators.

In the same vein, an interactive moot and mock arbitral process which was coordinated by the Young Members Group of the Chartered Institute of Arbitrators (UK) Nigeria Branch was also given considerable time by the organisers to the delight of participants.