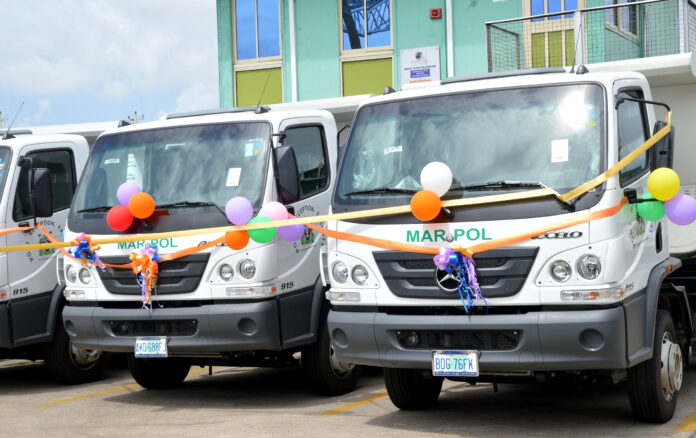 No fewer than 16 new specialised trucks have been procured by the management of African Circle Pollution Management Limited (ACPML) to evacuate waste generated in ships calling in the nation’s seaports.

The procurement of the trucks is in additional to the ones the company had earlier acquired in the discharge of its roles and responsibilities in Nigerian ports.

The move is in line with its desire to fulfil its mandate as contained in the agreement it signed with the Federal Government through the Nigerian Ports Authority (NPA).

The trucks which are fitted with the latest technology features were manufactured overseas by one of the vehicle manufacturing giants, Mercedes Benz.

The trucks are expected to enhance the operations of the company in the nation’s seaports situated in Lagos, Calabar, Port Harcourt, Warri and Onne.

The procurement of the trucks was in line with the requirements of Maritime Pollution (MARPOL) 73/78, one of the key guidelines of the global maritime watchdog, the International Maritime Organisation (IMO) which has its headquarters in London, United Kingdom.

With the provisions of MARPOL 73/78, the management of the NPA is mandated by IMO to provide adequate waste reception facilities for waste generated in vessels calling in Nigerian ports.

Unveiling the trucks in Tin Can Island Port Complex, Apapa, Lagos, the Managing Director of NPA, Ms. Hadiza Bala Usman commended the management of African Circle Pollution Management Limited (ACPML) for the strides it has made since it signed the Build, Operate and Transfer (BOT) agreement with the Federal Government.

Usman who was represented at the occasion by the NPA General Manager, Security, Mr. Nasir Anas Mohammed stated that the additional modern trucks the company have procured would go a long way in enhancing its operations in the months ahead.

The NPA Managing Director who took time to test drive one of the trucks said the move would help Nigeria to meet the requirements of the IMO as regards the evacuation of waste generated by ships in Nigeria territorial waters.

The Acting Co-ordinating Officer, ACPML, Mr. Ahmadu Fidi Ahmadu in his remarks said the firm procured the trucks in order to meet the increase in the demands for its services over the years.

He disclosed that while eight of the trucks would be used in the ports situated in Nigeria commercial nerve centre, Lagos, the other eight would be utilise in Onne Port Complex, Onne, Rivers State.

According to him, the choice of Mercedes Benz was informed by the fact that it is known for efficiency, performance and safety. We usually have service level agreements (SLAs) with an authorised distributor/dealer for training, service and support for our personnel.

Also speaking, the District Manager, ACPML, Mrs. Latifat Ibrahim stated that the firm has the support of the Federal Ministry of Transportation and the NPA in the discharge of its mandate in the ports.

While commending them for their support and co-operation over the years, she reiterated the readiness of ACPML to live up to expectations of stakeholders in its areas of operation.

Usman was accompanied to the occasion by top officials of the authority including a representative of the NPA General Manager, Health Safety, Environment (HSE), Engr. Yunusa Ibrahim.