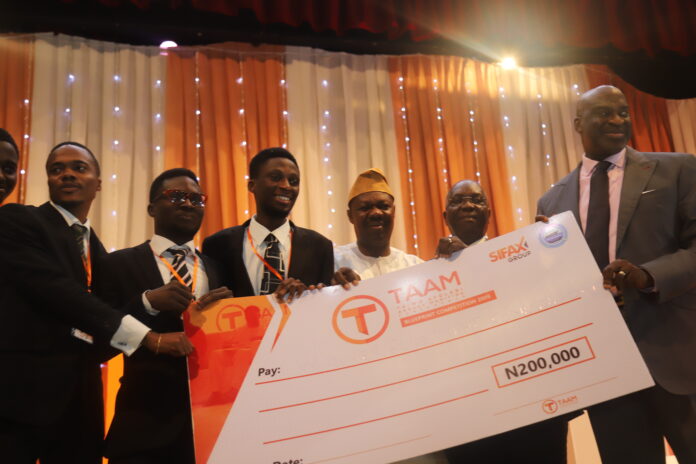 The competition, sponsored by SIFAX Group, is one of the activities of the Taiwo Afolabi Annual Maritime Conference, which is in its third edition and held in partnership with the Maritime Forum of the Faculty of Law, University of Lagos.

Mouth-watering prizes including laptops, smart phones and cash were given to the winners.

At the end of the keenly-contested competition, which used a debate format, Bowen University, Iwo, represented by Adekeye Olanrewaju and Dunmade Samuel emerged the overall winner with 85 points while University of Lagos represented by Pius Bankong and Ipinnuoluwa Ade-Ademi and Ekiti State University by Durola Ayobami Tosin and Oyewole Sunday came second and third respectively with 81 and 78 points.

Giving an insight on how the winners emerged, Sifax Group Corporate Affairs Manager, Mr. Muyiwa Akande in a statement made available to Maritime Bits said the first round of debate was on the merits and demerits of foreign direct investments in the maritime sector.

The final round of the debate was on the topic “Port Costs and Port Charges: A Recurring Decimal Under Port Reform Regime.”

Group Executive Vice Chairman, SIFAX Group, Dr. Taiwo Afolabi in his remarks gave reasons why the competition was organised by his company.

He explained that the competition was informed by the need to deepen the knowledge base of the law students and to stimulate their interest in the country’s maritime industry were responsible for the company’s sponsorship of the competition.

Continuing, he said: “We do not have enough maritime legal experts in the industry as I speak to you. Very few students also show interests in the legal aspect of the sector. Having identified this, the company decided to take up the sponsorship of the competition.

“We believe that this gesture would go a long way in stimulating interest of students in maritime law. I am personally leading the mentorship charge because as a lawyer, I have experienced first-hand the many opportunities inherent in the application of law to the maritime sector.

“We are also doing this because at SIFAX Group, it’s part of our corporate philosophy to positively affect the society”.

The statement added that SIFAX Group is one of Africa’s fastest growing multinational corporations with diverse interests in maritime, aviation, haulage and logistics, oil and gas and hospitality.