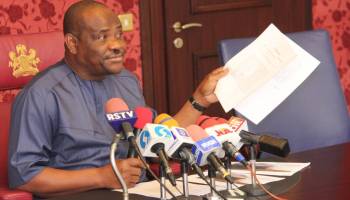 Rivers State Governor, Chief Nyesom Wike has kept his promise of giving a certificate of occupancy (C of O) to the promoters of Charkin Maritime Academy (CMA), Port Harcourt.
As a way of encouraging investment in the oil and gas rich state, Wike had during the formal unveiling of the first ever land ship in the country, MV Rivers Pride on February 9, 2017 approved a C of O for the land in which the land ship is situated at Ozuoba, along the East-West Road, Port Harcourt.
The land ship was built by CMA, an indigenous and privately-owned maritime training institution.
Apparently pleased with the strides made by the academy, Wike stated that the Rivers State Government would do everything possible to assist the maritime training institution to grow to an enviable height for the benefits of Rivers State indigenes in particular and Nigerians in general.
He lauded Wami and the management of the academy for the achievements it has recorded since it was established.
The Chairman and Chief Executive Officer (CEO), Charkin Maritime and Offshore Saf0ety Centre, Sir Charles K. Wami who disclosed this in a chat with journalists in Lagos said the C of O has been handed over to CMA.
Wami lauded the governor for fulfilling his promise to the academy, pointing out that with this development, many investors will take the Rivers State Government serious on its drive to encourage investors to invest in the state.
According to him, the fulfilment of the governor’s promise to CMA will spur him and the management of the academy to do more in the years ahead. To say the least, we are very pleased with this development. You are aware that it was during the unveiling of the first ever land ship in Nigeria that the governor made the promise. Today, we are happy that the governor has kept to his promise by giving us the certificate of occupancy. We are very grateful.
He explained that the support of the state government would enable the training school attain set goals and objectives.
He pointed out that the academy needs the encouragement of all stakeholders to continue to provide maritime education and training of international repute.
“The school has a trend of rendering and improving on high quality training to guarantee competence in a conducive and friendly environment. It is a one-stop-shop for marine, oil and gas training”, he said.
The land ship comprises full mission navigational bridge simulator; ECDIS Simulation Room; GMDSS (Navigation) Simulation Room which conforms to the 2010 Manila Amendments by the global maritime watchdog, the International Maritime Organisation (IMO); and the basic dynamic positioning class.
Other components of the land ship are advance dynamic positioning and examination class; nautical institute examination room; and the drilling system crane simulator.
The school has the approval of local and international regulatory agencies across the globe. These include NIMASA, Department of Petroleum Resources (DPR), OPITO, United Kingdom, and the International Well Control Forum (IWCF), United Kingdom.
Others are the Nautical Institute (NI), Oil and Gas Training Association of Nigeria (OGTAN), International Association of Safety and Survival Training (IASST), United Kingdom, and the Petroleum Technology Association of Nigerian (PETAN).
Besides the fact that it is a member of British Safety Council among others, it is also affiliated to the Regional Maritime University, Accra, Ghana.