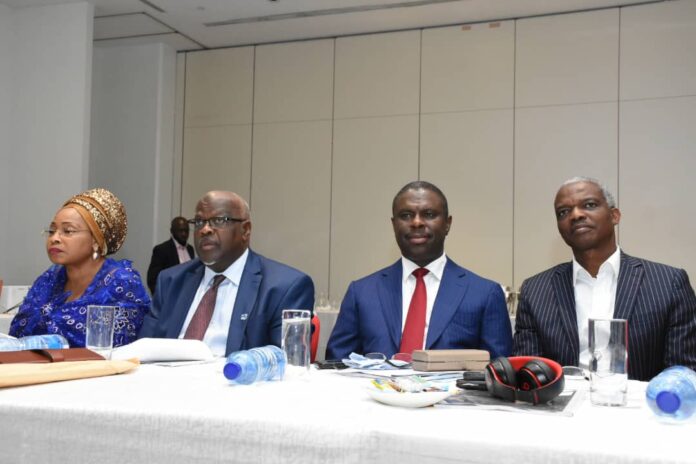 Apparently aware of attempts in some quarters to unbundle the Nigerian Maritime Administration and Safety Agency (NIMASA), its Director General, Dr. Dakuku Peterside has stated that creating additional agencies in the maritime sector would overburden the sector.

The NIMASA helmsman statement is coming on the heels of the Tuesday public hearing in the National Assembly in order to pass the Maritime Security Agency Bill 2017 into law.

If the proponents of the bill popularly referred to as the MASECA Bill succeed, the new agency would take over a substantial components of the present roles and responsibilities of NIMASA as its functions are similar to the ones provided in the NIMASA Act 2007.

Peterside averred that what needed to be done was to strengthen the existing ones for optimum service delivery.

A statement signed by NIMASA Head, Corporate Communications, Mr. Isichei Osamgbi and made available to Maritime Bits quoted Peterside saying this during the 2018 Half Year Maritime Forecast Review which took place in Lagos recently.

Peterside revealed that already there are complaints by ship owners that it is only in Nigeria that you have too many government agencies interfacing directly with vessels calling at the nation’s seaports.

His words: “I have been receiving a lot of complains by ship owners that different government agencies board their vessels to request for documents which many a times result in duplication of duties  and increase the delay in turnaround time of vessels. So it means if we create new agencies we are simply going to overburden the sector which is enjoying a new level of progression under President Muhammadu Buhari”.

He pointed out that in order to avoid duplication of duties and support the ease of doing business agenda of the Federal Government, the agency has a Memorandum of Understanding (MoU) with the Armed Forces as well as collaborations with the Nigerian Customs Service (NCS), Nigerian Immigration Service (NIS), Nigerian Police Force (NPF) and even the Central Bank of Nigeria (CBN).

He further said that the current maritime regulatory agencies under the Ministry of Transportation have enough mandates to ensure safety and security in the sector adding that the Nigerian Navy could not be allowed to board merchant vessels for regulatory activities according to International Maritime Organisation (IMO) regulations, Merchant Shipping Act and other regulatory instruments that are in line with global best practices.

“There is no way the Nigerian Navy can act as a regulator in the sector and we have been working together especially in line with the MoU that exists between us to ensure security in the sector which is in line with what the IMO stipulates and so we should not be thinking about creating more regulatory agencies or the Navy taking over the job of other regulatory agencies. The best thing to do is to strengthen these agencies to be able to perform optimally” he said.

He charged stakeholders to support the maritime industry’s growth stating that things are changing at an incredible pace and that there is the need to support the current maritime agencies to dynamically position the sector for optimal benefits.

Maritime Bits records showed that Peterside has not failed to use every avenue to continuously advocate for the growth of the sector through regular engagement of stakeholders.

He maintained that this would chart a way that is best beneficial to the industry and indeed the Nigerian economy.

Meanwhile, Peterside has stated that partnership is a crucial element to the effective utilization of Africa’s maritime resources, just as a committee of Stakeholders has been set up to map out strategies to develop the Nigeria’s blue economy.

Peterside stated this in the 2018 celebration of the African Day of Seas and Oceans held in Lagos with the theme “Partnership Key to a Sustainable Blue World”.

He noted that the need for countries in the African continent to collaborate has become imperative in order to realize a common goal, geared towards the actualization of the blue economy.

His words: “Our passion for Africa’s partnership inspires our leadership role in the Association of African Maritime Administration (AAMA) to continue to innovate with ideas to pull African Maritime Administrations (MARAD) together for sustainable realization of the objectives of the African Integrated Maritime Strategy (AIMS) 2050 towards a peaceful, prosperous and integrated Africa where there will be equal opportunity to participate towards economic growth.”

Peterside noted that the world is concerned about the sustainable use of the seas and oceans as it is endowed with enormous resources, hence the need for Africa to utilize the opportunities embedded in it.

While using the opportunity to call for more collaboration among stakeholders in realizing a robust maritime sector in Nigeria and Africa as a whole, he assured that NIMASA will continue to engage and educate the public on the sustainable use of the seas and oceans.

The event which was well-attended by stakeholders and experts in the maritime sector also had in attendance the Managing Director, Starz Marine and Engineering Services Limited, Engr. Greg Ogbeifun as the Chairman of the occasion.

Ogbeifun in his opening remarks stated that the world is beginning to go back to the original creation God blessed mankind with, the seas and the oceans.

He noted that Nigeria is at a vantage position with a good geographical location with about 900 kilometres coastline, hence the need to work harmoniously to realize the blueprint of the AIMS 2050 with the overall goal of actualizing the concept of the blue economy in Africa for continental economic growth.

Also speaking at the event was Mrs. Margaret Orakwusi who delivered the lead paper titled; “National Maritime Strategy and the National Maritime Transport Policy Framework: How Far is the Road Yet?” concluded by saying; “For Nigeria to develop a robust and sustainable maritime sector, there is the need to prepare an all-inclusive framework and strategy based on the development strategies of the African Union in line with the AIMS 2050, Agenda 2063, Lome Charter and the African Maritime Transport Charter”.

In his paper titled “Developing our Blue Economy as a Critical National Economic Objective: The Partnership Model”, Dr. Chris Asoluka stated that the only way to fully optimize the opportunities embedded in the African seas and oceans is to work collaboratively as a continent, so that we can compete favourably with our counterparts in other continents. He also reiterated the fact that Nigeria’s maritime domain remains a fertile ground waiting to be fully utilized for economic growth and development.

On his part, Professor Babajide Alo an environmental expert advised that beyond the annual celebration of the event, partnership strategies to ensure sustainable implementation of the resolutions must be considered so that in the long run all set goals are achieved for the benefit of the entire African continent.

At the event, the NIMASA Board Chairman, Major General Jonathan India Garba (retired) and the Director General, Nigerian Chambers of Shipping, Mrs. Obiageli Obi in their goodwill messages unanimously agreed that it is important to realize that the world is getting more and more dependent on resources from the seas and oceans, noting that it is the engine for economic growth. They also urged stakeholders in the maritime industry to work together for the benefit of the actualization of the Blue Economy in Africa.

The highpoint of the event was the setting up a partnership committee on implementation of sustainable blue economy in Nigeria. While Garba will chair the committee, NIMASA Deputy Director, Marine Environment Management, Dr. Mrs. Felicia Mogo will serve as Secretary.

Maritime Bits recalls that the 22nd Ordinary Session of Heads of States and Governments adopted the 2050 AIM Strategy and Plan of Action, including a roadmap for the incremental implementation of the strategy in line with International Maritime Law.

The African Day of the Seas and Oceans was instituted by the African Union in 2015. It seeks to draw attention to the strategic importance of proper management of marine resources for the development of the African continent in a sustainable manner.