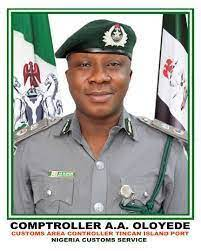 *Hands over Suspected Smuggler of Contrabands to DSS

The Customs Area Comptroller (CAC), Tin Can Island Port Command, Apapa, Lagos, Comptroller Adekunle Oloyede has boosted the Nigeria Customs Service (NCS) revenue profile with a whopping N274.3 billion in six months.
The Customs Chief achieved the feat following his strict enforcement and execution of anti-smuggling activities in the command which has Nigeria’s busiest port under its watch.
The N274.3 billion generated by the command is 27.50 percent increase compared to that of year 2021 in the period under review.
Revealing how the command achieved the feat, Oloyede told news men recently at the command headquarters, Apapa that the performance report of the command with respect to export rose by 73 percent to 138,246.50 metric tons in the first half of the year.
He also disclosed that the export cargo had over N100.45 billion in free on board (FOB), representing a 60 percent increase from N66.29 billion recorded on the 100,500 metric tons of export cargo throughput in the same period of 2021.
Comptroller Oloyede who commended the management of the Nigerian Ports Authority (NPA) for creating a seamless collaboration that facilitated the clearance of export cargo in the command stated that the men and officers under his watch made various seizures and detentions with a duty paid value (DPV) of over N1.3 billion.
He revealed that the breakdown of the seizures include 145kg of Colorado Indian Hemp concealed in two units of Ridgeline trucks and two units of Toyota Corolla vehicles; 206,000 pieces of machetes; 640 bales of used clothes; 236,500 pieces of used shoes; 62,500 pieces of new lady’s shoes; 1,670,400 pieces of chloroquine injections; 1,814,400 pieces of Novalgen injection; 48,850 rolls of cigarettes and 23,800 tons of sodium bromate and baking powder in addition to 3,303 pieces of motor batteries found in three containers that were falsely declared.
Also seized were three units of used Toyota Hiace buses; four units of used Mack truck heads; one unit of used Toyota Sequoia 2008 model; one unit of used Mercedes Benz GL450 2008 model, and one unit of used 2011 Toyota 4 Runner that the clearing agents forged the signature of the Area Comptroller. He added that the command had strengthened its risk management structure to mitigate constant attempts by some non-compliant agents to abuse the process through falsification of documents and forgery of signatures
Oloyede explained that the seized and detained items contravened sections 46, 47 and 161 of the Customs and Excise Management Act (CEMA) CAP 45 of 2004. According to him, the command had handed over one suspect, one pistol gun, two empty magazines, and 300 rounds of live ammunition to the DSS for further action.
According to him, the command has created a dispute settlement structure that aligns with the provisions of the import duty mechanism, which allows an importer to take delivery of his consignment in the case of persistent dispute after securing a bank bond worth the duties and taxes payable on the item being disputed.
On the implementation of the VIN valuation policy at the command, the CAC said the command had overcome the challenges experienced at the early stage of the deployment of the policy through continuous engagement and consultation of relevant stakeholders.
His words: “The VIN valuation has helped the command achieve an expedited clearance process due to predictability of value assessment, increase in revenue generation, improved ease of doing business, generation of accurate statistics for government and a host of others”.