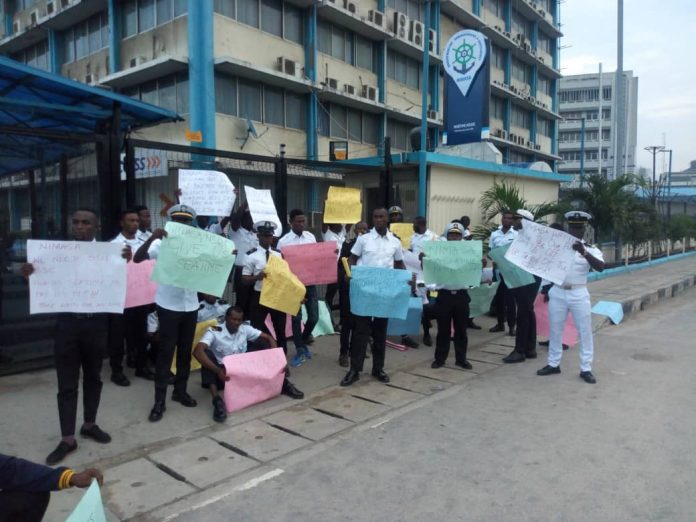 Apparently worried by the uncertainty surrounding their sea time training, cadets under the auspices of the Nigerian Seafarers Development Programme (NSDP) have stormed Maritime House, the corporate headquarters of the Nigerian Maritime Administration and Safety Agency (NIMASA).

The cadets protested against the long delay in registering them for the mandatory sea time training long after they have completion of their studies overseas.

Carrying placards with different messages, the cadets expressed dismay that two years after they completed their studies, they are yet to start their sea time training as earlier promised by the agency.

The protest of the cadets is coming on the heels of concern in some quarters that the sea time training has hit the rocks as more attention is devoted to politics rather maritime development as campaign ahead of the 2019 general election takes the centre stage.

Though the protesting cadets were prevented by security operatives from entering the sprawling headquarters of the agency, they were eventually allowed in and addressed by the Director General, Dr. Dakuku Peterside.

He allayed the fears of the cadets just as he reiterated that all beneficiaries of the NSDP conclude their programme by getting the mandatory sea time training.

Peterside noted that NIMASA is doing all it can to ensure all those who graduated in the scheme are duly enrolled on ocean-going vessels within the shortest possible time.

The NIMASA helmsman assured that in addition to the over 600 cadets who have benefitted so far from the sea time training, the agency is working so hard to ensure that another batch of not less than 200 cadets are enrolled between now and the first quarter of 2019.

“Sea time training is your right and I assure you that none of you will be denied the mandatory sea-time training. On our part as an agency, we value human capacity development, which is the hallmark of any economy that will thrive; hence we will not rest on our oars until we see you succeed”, he said.

He informed them that the agency is in discussions with some foreign institutions to place seafarers on board ocean-going vessels and that in no distant time more cadets will be placed on board for their sea-time training.

He hailed the contribution of seafarers to the growth of the economy, just as he expressed confidence that in no distant time, Nigeria will be a great exporter of seafarers on the African continent.

“We are not training you to be placed on-board Cabotage vessels for only local trade; but rather, we are investing so much on you so that you can be placed on-board ocean-going vessels, which will put you on the same pedestal with your counterparts in the global maritime community, thereby giving you an edge to compete favourably”, he said.

Initiated in 2008 when Dr. Shamsudeen Ade Dosumu was the Director General of NIMASA, the NSDP conceived as a deliberate policy to ameliorate the dearth of certified and qualified seafarers in the country. It was also meant to address the depletion of seafarers in our national pool due mainly to age and migratory instinct for greener pastures by seafarers.

The NSDP was formally flagged-off in September, 2009 to complement full implementation of the Cabotage Act, 2003, which in itself is geared towards strengthening indigenous tonnage capacity with one of its cardinal objectives being that coastal vessels are to be exclusively manned by Nigerians.

NIMASA Head, Corporate Communications, Mr. Isichei Osamgbi in a statement made available to Maritime Bits said the dearth in certified and qualified seafarers in Nigeria was a poignant reminder and a wake-up call for the agency.

According to the statement, the NSDP scheme has not looked back since September, 2009. Out of the over 2,000 beneficiaries of the scheme, 340 cadets have already completed their sea-time training.

In the same vein, no fewer than 150 cadets are undergoing the sea-time in Egypt and another 89 others are in the United Kingdom.