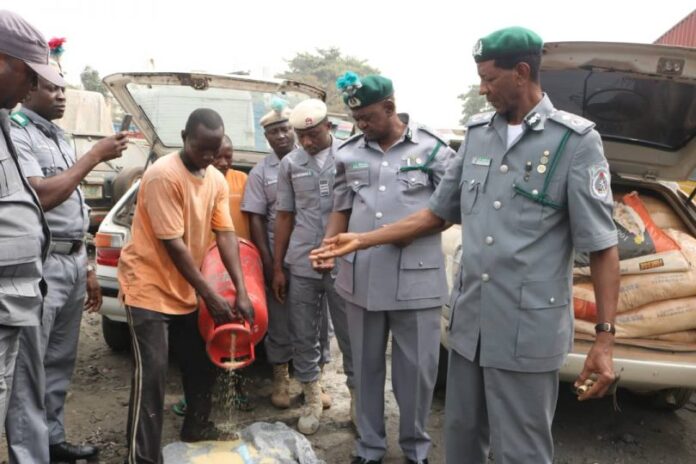 The contraband with a duty paid value (DPV) of N1.1billion was intercepted at various locations in the month of February.

According to Uba who was hitherto the CAC, FOU Zone C, Owerri, Imo State, the vehicles seized by his officers and men include one Rolls Royce, one Chrysler, one Audi Q7, one Land Rover HSE, one Toyota Venza, one Ford Taurus, one Honda Cross tour, four Mercedes Benz, three Kia Rio, and one Escalade.

On the location of where the items were seized, he stated that while some of the vehicles were intercepted along Ijebu Ode Expressway, others were evacuated from a car mart located in Lekki, Lagos.

His words: “Remarkably within the month under review, the Warehouse Operations Team led by Assistant Comptroller Mutalib Sule while on intelligence raided an apartment at number 38, Ogundana Street, off Allen Avenue, Ikeja, Lagos and evacuated the following: 55 sacks of Pangolin shells weighing 2001kg valued at N408, 319, 317. 6; and 218 pieces of elephant tusk weighing 343Kg and valued at 85,156,649.96”.

“You will recall that the responsibilities of the Nigeria Customs Service have undoubtedly increased tremendously overtime because of the implementation of different International protocols and conventions. The Convention of International Trade in Endangered species (CITES 1973) entails that Customs administration globally protects wild life by intercepting illegal trade on such animals. It further prevents the killings of endangered species since the tusks are only available after the killing of the elephant and pangolin. In the spirit of inter-agency collaboration, the seized pangolin and tusks have been be handed over to Nigeria Environment Standards and Regulatory Enforcement Agency (NESREA) for further investigation in collaboration towards protecting our natural habitat.

“For the avoidance of doubt, our action is in-line with the provisions of Sections 147 of Customs and Excise Management Act (CEMA) Cap 45, Laws of the Federation of Nigeria 2004 (power to search premises), Section 158 of CEMA, Cap 45 Laws of Federation of Nigeria (power to patrol freely). Also, a 1/20ft container number CAIU0961053 was seized for false declaration, which is tantamount to seizure. Seventeen suspects have been arrested in connection with these 90 seizures including Mr. KO Sin Ying, a Chinese”.

Continuing, Uba said: “Within the period under review, we have also recovered N67, 945,158 from demand notices raised on goods intercepted while attempting to beat the system through transfer of value and under declaration, making a cumulative of N1, 103, 177, 204. Let me thank you, members of the media for your continued support to inform, sensitize and educate the general public on the effects of smuggling to the nation’s economy”.