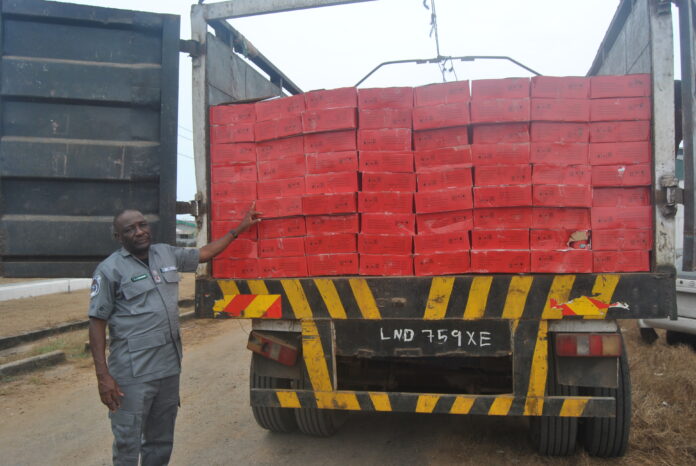 The Nigeria Customs Service (NCS) has started a crackdown on the activities of those it called “deviant smugglers” in Nigeria’s premier border, Seme.

Spearheaded by the NCS, Seme Command, the service said the smugglers have hitherto refused to heed to the clarion call to desist from cross border crimes through sensitization and creation of awareness under various platforms.

The command in a statement said the operatives of the command’s enforcement unit acting promptly on classified information, intercepted 2200 cartons of tin tomato in a truck with registration number LND 759 XE along the Lagos-Badagry Express Road.

Signed by its Public Relations Officer (PRO), Mr. Taupyen Selchang Kashang, the command revealed that 63 front and backlight of used spare parts (light accessories) were intercepted by its officers and men.

It also disclosed that the goods has a duty paid value (DPV) of over N6 million, pointing out that they have been deposited in Government Warehouse.

“It is a routine practice of the command to interface with its stakeholders at various levels for mutual consultation, sensitization and creation of awareness on the need to comply with the Federal Government policies on import prohibitions”, it added.

While inspecting the seizures, the Customs Area Controller (CAC) of the Seme Command, Comptroller Aliyu A. Mohammed  disclosed that the new operational strategies adopted by the command that is intelligent driven is yielding positive results, as victims of non-compliance are nib in the bud by the eagle eye of the enforcement officers and men of the service.

He stated that the command’s holistic approach in executing the mandate of the service led to an all-encompassing result as revenue generation, suppression of smuggling and legitimate trade facilitation is adequately enhanced at the Lagos –Abidjan corridor without compromising national security.

According to the CAC, the command being an international land border, the officers need to ensure that the golden rules for the service operation is always brought to the fore while discharging their statutory functions.

He enlightened officers and men on the need for positive attitudinal change that is vital to the discharge of their professional functions with due diligence just as he warned them to be aware of the current wind of change blowing in the service hence the need to key into the reform agenda of the Comptroller General of Customs, Colonel Hameed Ibrahim Ali (retired).

He added that failure to comply with approved procedures and guidelines in order to avoid infractions will be met with severe disciplinary actions that is commensurate with the offence committed in line with the service preventive regulation.

Mohammed noted that the command was no longer a safe haven for illicit activities and trans-border crimes, as any attempt by deviant stakeholders are always met with stiff response by the proactive officers and men of the command’s anti-smuggling unit.