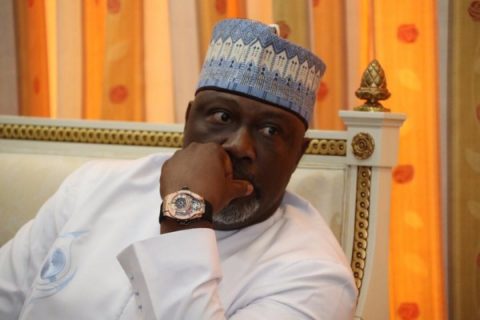 There are more woes for the embattled Senator representing Kogi West, Mr. Dino Melaye as an Abuja Chief Magistrate Court sitting at Mpape, has ordered that his younger brother, Samuel and three others should be remanded in Kuje Prison. Abuja.

The court held that the quartet who was docked by the Nigerian Police Force (NPF) for obstruction, should remain in prison custody till April 30 when the merit of their bail application will be considered.

Those the court remanded alongside Samuel Melaye were Amaefula David, Pius Inyang and Mohammed Wazari. The defendants pleaded not guilty to the First Information Report (FIR), Police entered against them on Wednesday.

The charge followed the incident at Area One, Roundabout in Abuja, which botched alleged moves to forcibly relocate Melaye to Lokoja in Kogi State to answer to pending criminal allegations against him.

The embattled lawmaker was said to have jumped out of the NPF van conveying him to Lokoja, and was allegedly whisked away by his supporters who were said to have blocked the road with their vehicle.

Melaye was subsequently re-arrested at a private hospital where he was admitted for treatment, and later transferred to the National Hospital in Abuja by the Police. Meanwhile, in the FIR Police filed before the Magistrate Court, it slammed the four defendants with criminal conspiracy, obstruction of public servant from performing his lawful duties, as well as abatement and assault on police officers. Offences the defendants committed were said to be contrary to sections 97, 85, 267 and 173 of the Penal Code Law.