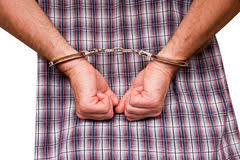 A man who was arrested in Texas for having a license plate flipper was already prohibited from driving on a toll road because he owed $5,473.07 in tolls, police said in a Friday social media post.

“He would activate this device, putting a flipper down in front of his license plate, so the cameras at toll plazas could not read his plate,” Houston TV station KHOU quotes Herman.

Talbot’s mother told the station that the incident was a “stupid mistake.” While devices that flip license plates can be bought online, they are illegal to own in Texas, the station reports.