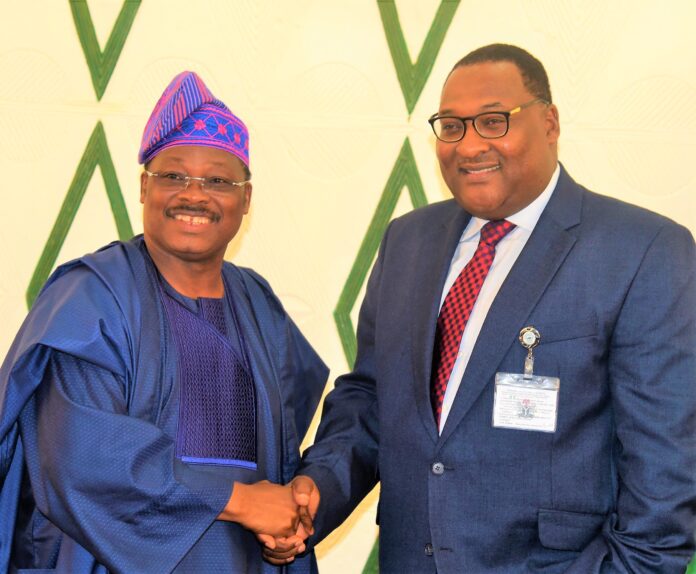 The Nigerian Shippers Council (NSC) has entered into partnership with the Oyo State Government for the development of Inland Dry Port (IDP) and Truck Transit Park (TTP) in   conjunction with some Chinese investors.

The partnership arrangement was unfolded when   the Executive Secretary/CEO of the NSC, Mr. Hassan Bello, paid a courtesy visit to the Oyo State Governor, Senator Abiola Ajimobi at the Governor’s Office in the state capital, Ibadan.

Bello  said that  collaborating with the Oyo State Government on the establishment of  IDP will bring about a lot of  developments to  the  Nigerian economy, stressing that Oyo State was  critical to the development of transportation in view of  its strategic location.

According to him, since 2006, the federal government had taken a decision to establish IDPs in the six geo-political zones of the country of which Oyo State is one.

Describing transportation as a driving force in the national economy, the Bello said that the establishment of IDP and TTP in the state will provide job opportunities and create wealth for the state.

The NSC CEO also said the ongoing rail project being championed by the Ministry of Transportation will be a big boost to the IDPs as it  will help decongest the heavy traffic on  the  road    as  well as  facilitate easy movement of  goods from Lagos ports to different locations in the country.

He disclosed   that the proposed TTP alone would gulp N4.8 billion through the Public Private Partnership (PPP), adding that the facilities will include shopping mall, hotels, motels, worship centre, commercial banks, restaurants among others.

He explained that  the idea of TTP  was  to have    a secured and convenient place for truck drivers to have as   resting places while moving goods from one location to the other.

He noted that a   Memorandum of Understanding (MoU) was signed recently with the Chinese investors for the development Ibadan dry port project, adding that the interest shown by the investors was in consideration of the strategic importance of Ibadan.

He solicited the support of Oyo State government for their allocation of the land for the development of the TTP.

Ajimobi who was impressed by the two concepts assured NSC of the support of the administration and called on the council to hasten the paper works required for the project to begin.

He said that there was no reason the state should not have started the project much earlier, considering the geographical and human capital advantages Oyo state has over other states.

The governor said that the project would cause a remarkable reduction in road carnage, improvement in economic activities and job opportunities.

He called for a committee to be set up between the two partners for a successful and speedy implementation of the project.