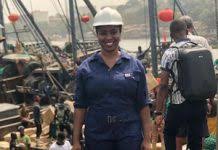 Regina Conteh-Khali is not an ordinary woman. She is doing what many people including men will not ordinarily do for a living. Unlike many of her folks, she is into seafaring a job not cut out for the lily livered. The young Sierra Leonean female seafarer narrated how a relationship between African Women in Shipping (WIMAfrica) and the Sea Shepherd, a shipping firm changed her life for the better. The company gave her an opportunity to be back at sea doing seafaring, a job she cherishes.
The shipping firm is mainly concerned with efforts at stopping illegal fishing for countries and to secure seafarers for bigger vessel owners. However, a few months ago, Conteh-Khali responded to a call by WIMAfrica’s Continental President (CP), Mrs. Jean Chiazor Anishere, for members who are seafarers to send in their curriculum vitae.

The beginning of a new dawn in her life started Sea Shepherd contacted her and offered her a job at sea.

Apparently elated by the development, Conteh-Khali was full of praise for Anishere’s gesture even as she gave an insight into how it all started a few months ago.

Her words: “A few months ago our CP asked the female seafarers in this group to send their CVs. Being a seafarer, I sent my curriculum vitae to her, because I had stopped going to sea for a while as there were no shipping companies recruiting seafarers in my country anymore.

“Getting a vessel or company to hire seafarers in Sierra Leone is challenging not just for women. A lady called Bea (the crew coordinator for Sea Shepherd) contacted me some weeks ago and today we had a video session. She has offered me a job and I am so excited.  Thank you so much CP, I am grateful to you and every other woman working tirelessly to empower women in the maritime industry. It is still my dream to become the first female captain in Sierra Leone and you have just made that possible for me. I’m happy to go back to sea.”

Apparently please by her sense of appreciation the WIMAfrica President gave an insight into how the employment of the female seafarer begun.

Anishere, a legal practitioner and former President of WISTA revealed that she connected with Captain Peter Hammardstedt, the Director of Campaigns in Sea Shepherd, at a Blue Economy Conference in Tunisia which dovetail into  discussions on the need for job placement for WIMAfrica’s members who needed jobs at sea.

Her words: “He told me to send him their names and certificates which I did. I sent him over sixty names and certificates from nine African Countries who are members of WIMAfrica, Nigeria inclusive. So we are hopeful that we will get more of our girls on board ships soon. Conteh-Khali’s experience matches the 2019 World Maritime Day focus of “Empowering Women in the Maritime Community.”