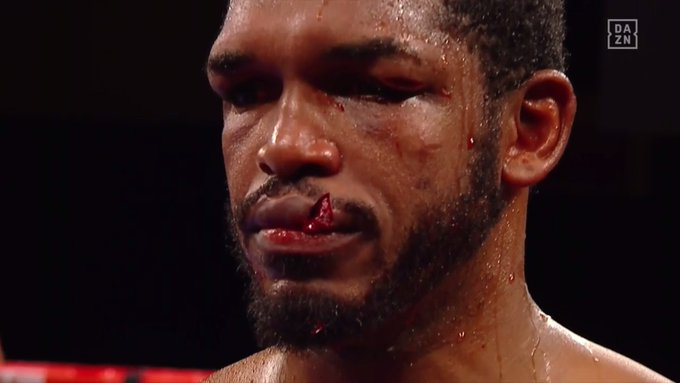 There have been some gross ways to end a boxing match in the sport’s history, but not many are going to top one that ended with a boxer missing more than 10 percent of his upper lip.

That was the case in Friday’s bout between WBO Intercontinental middleweight champion, Jaime Munguia and Tureano Johnson at the Fantasy Springs Resort Casino in California, United States of America (USA).

Specifically, it was Munguia landing an uppercut on Johnson in the sixth round that left the Bahamian veteran without a sizable chunk of the skin above his mouth. The fight was called soon after the blow as a KO victory for Munguia who improved his record to 36-0 with 29 knockouts.

It was a hard right uppercut from Munguia that left Johnson with his lip injury. In slow motion, you can see sweat, blood and potentially other stuff flying off the boxer as the punch lands. The whole thing was pretty apt for the night before Halloween.

It was not too long ago that we saw something similar in the world of MMA, as a UFC heavyweight fight between Jairzinho Rozenstruik and Alistair Overeem left the latter also missing a chunk of his lip.

These guys do not get into boxing and MMA to become prettier, we can tell you that much.