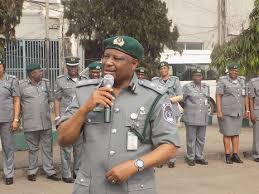 The Nigeria Customs Service (NCS), Apapa Area Command has failed to meet its revenue target of N35.5 billion for January 2018.

Regarded as the flagship command by the Nigeria Customs Service (NCS) owing to the quantum of revenue generated annually by the service compared to its counterparts other Customs formations, the command is home to Nigeria’s premier port, Apapa Quay.

Though it is presently under the management of a concessionaire, APM Terminal Limited, one of the subsidiaries of Danish port operations and logistics giant, AP Moller Group, as a result of the concession of the nation’s seaports by the Federal Government over a decade ago, the command is also home to Apapa Container Terminal (ACT), Apapa.

The ACT which is a key component of the Lagos Port Complex (LPC), Apapa remains the largest container terminal in the African continent.

On its content, the CAC disclosed that they contained controlled and regulated drugs which were said to have been imported by one Villa Gold Pharmacy from India.

He decried the flooding of Nigeria with adulterated drugs by foreigners, especially by Indians, even as he wondered the danger the populace would have been exposed to if the drugs laden containers made their way into the open market.

His words: “One wonders what negative impact would have resulted in the aftermath of these drugs finding their way into the larger society”.