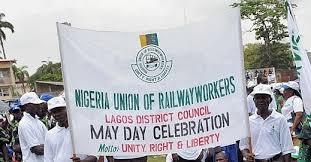 Comrade Innocent Luka Ajiji has resumed duty as the acting President General of the Nigeria Union of Railway Workers (NUR).

Garba was retired following the completion of the statutory 35 years in public service with Nigerian Railway Corporation (NRC).

Ajiji was employed by the NRC on September 15, 1997 as Assistant Locomotive Driver in Kafanchan, the headquarters of the North Central district of the corporation after excelling in the initial Diesel Training School, Kafanchan.

A statement signed by the Secretary General of NRC, Comrade Segun Esan and made available to Maritime Bits, said over the years, the labour leader has attended numerous training programmes locally and overseas. Among the trainings he attended included Railway Safety and Modern System on British Standard Gauge and Advanced Motive Power Operations and Maintenance 2013 in United Kingdom and South Africa respectively.

He has been promoted a number of times and he is presently a substantive Locomotive Inspector with growing experience and expertise.

According to the statement, the labour leader began his trade union activities when he became the chapter auditor of the union from 1999 to 2002 and later became the branch auditor from 2002 to 2005. He has also held offices as District Secretary 2008 to 2011; District Chairman 2011; Vice President General 2011 to 2015; Deputy President General 2015 to 2018 where he rose to the post of Acting President General till when the union will go for its delegates conference in December 2018 when elections to various offices, among other business of the delegates conference, will be held.

The statement added that Ajiji holds a Diploma in Marketing from the University of Jos. He also has in view a degree in Political Science from the National Open University of Nigeria (NOUN). He is happily married and blessed with children. He enjoys reading, tourism, lawn tennis and boxing.

Findings by Maritime Bits showed that NUR has contributed significantly to the development of national industrial consciousness, trade unionism, labour movement and workers’ rights through what the union called “quality and impactful leadership” of its former leadership over the years.