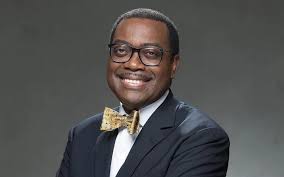 After months of intrigues and politicking, Nigeria’s erstwhile Minister of Agriculture, Mr. Akinwumi Adesina has been re-elected as the President of the African Development Bank AfDB.

His emergence was sequel to his being the only candidate for the prestigious position of the continental organization.

Reports monitored by Maritime Bits Thursday showed that he was elected unopposed at a virtual Annual General Meeting (AGM) of the bank.

The head of the African bank had appealed Wednesday for a second term in office after a months-long storm over alleged corruption and poor governance which ended after he was cleared in an independent probe that caused a stir in certain quarters.

Speaking at the AfDB’s through a statement, Adesina stated that his second term request was being done “with an acute sense of duty and commitment.”

Continuing, the statement said: “I do it to serve Africa and our bank, in an unbiased way, to the best of the abilities that God has given me”.

It is on record that Adesina was first elected in 2015 just as the AfDB remains one of the world’s five biggest multilateral lenders.

The erstwhile Minister who made waves when he was appointed by former President Goodluck Jonathan attracted wide recognition last October when the AfDB secured $115 billion (105 billion Euros) in funding pledges – a move that doubled the 56 years old bank’s capital and entrenched its triple-A credit rating.

His re-election of Adesina to the coveted seat was considered as a mere formality as he was the only candidate that was contesting for the continental bank presidency.