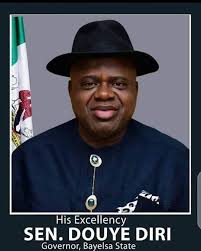 My dear governor and brother, in a recent closed door briefing I referred to you as a man from a very humble background being the son of a teacher, a headmaster and above all, you were also once a teacher. The above distinguishes you as a learner and a teacher.

That is why your calm composure and empathic disposition to all categories of people, young and old, political allies and opponents, boys and girls in the midst of a pandemic that has frozen and paralyzed the socio-economic order of the entire world has been extraordinarily incredible.  There is no doubt in my mind of your ability to turn things around for the state at the appropriate time.

Your Excellency, your speech after being sworn-in as the 5th Executive Governor of Bayelsa State upon the landmark Supreme Court judgment on 13th February, 2020 was in my opinion the hallmark and the true values of who you are. Since then I have come to terms with that judgment which was tagged by no other person than you as “miraculous”. Indeed, it has rightly and universally earned you the name “The Miracle Governor”. To me, that was miracle number one.

Just as you were about settling down, spanners were immediately put to work by some overzealous persons including the erstwhile chairman of a political party to test the will of the Supreme Court. Not surprising, they got what they did not bargain for as they were subjected to thorough ridicule by the eminent jurist of the Supreme Court as we saw very senior advocates crumble on their seats while the verdict was being read. I call this the second miracle and it occurred on 25th February, 2020.

Yet you preached love and extended hands of fellowship to your adversaries and friends to join you in positioning Bayelsa State to where she should rightly belong in the comity of states.

The extraordinary manner you embraced the Honorable Minister of State, Petroleum Resources, Chief Timipre Sylva whom pundits thought was your avowed political enemy. Instead, you sat side by side with him, throwing banters and cracking jokes for the common good and health of the people of Bayelsa State during the launching of the COVID-19 Isolation Centre in the state capital, Yenagoa. We have ministers that are former governors who do not see eye-to-eye with their state governors.

By this act, you exhibited and embraced the mentality of caring for each and every Bayelsan across the aisle. In this regard, I must also commend the Honourable Minister of State, Petroleum Resources whose sense of patriotism and humour I have never doubted.

Each time I sit with you and express my honest concerns arising from the senseless litigations and the devastation of the COVID-19 pandemic, as well as the dire consequences it may pose to the state resources, you never hesitated in disarming me with your charming and infectious smiles. You also encouraged me with reassuring statements. For me, this is courage. In the words of Teddy Roosevelt, the 29th President of the United State of America (USA), “courage is not having the strength (resources) to go on. It is going on when you do not have the strength (resources)”.

Instead of vilifying your perceived and real political enemies including those who made the courts, extension of their homes and offices, you called for truce and extended the olive branch once again, just as you asked even the hardest of your hard line supporters to use all available means to draw them nearer. You also enjoined them to bring their white, red and blue economies on the table and together we can make Bayelsa State a better place for our children and the generations yet unborn. That is leadership from a true unifier in chief.

It is also on record that you gathered a select few comprising eminent chiefs, respected elders and opinion leaders to reach out to all aggrieved persons irrespective of party affiliations to preach your gospel of reconciliation. The third judiciary journey started in earnest. They made themselves incommunicado against your emissaries to avoid hearing your message, believing that the court will rule otherwise.

But on 14th July, 2020, the third miracle of Senator Douye, the son of Abraham, the grandson of Michael and the great grandson of Diri came upon Bayelsa State and was affirmed by the highest court in the land in a manner that the prosecution lawyers could not utter a word but to bow out of court in order to retain their dignity. This has finally put to rest the inordinate ambitions of those avaricious and self-acclaimed leaders who ganged up against you and the party that gave them the platform to actualize their ambition in the first place.

Thank God, the land of sacrifice, the theatre of the Ijaw liberation struggles (from the 12th Day Revolution to the Kaiama Declaration to the Odi Massacre) has finally yielded a God given leadership. I am highly elated that the last man standing amongst the freedom fighters, Captain Sam Owonaru witnessed this historic moment before departing to meet his comrades in action (Major Isaac Jasper Adaka Boro and Captain Nottingham Dick) so he will tell them that he saw it happen.  Oh, what a joyous moment!

My governor, one significant thing you have done that will remain indelible in the hearts and minds of Bayelsans is the smile you have brought to those forgotten heroes like your father and others who were denied their legitimate benefits after expending a greater part of their useful lives to meritoriously serve our state and nation.  Your candour has distinguished you from the ineptitude of some past leaders who despite receiving enormous allocations from the federation account treated these senior citizens inconsequentially as if their selfless services did not matter.

His Excellency, Senator Douye, Diri (SDD), let me further assure you that in solidarity and optimism, we shall stand by you in fulfilling your drive to deliver Bayelsa State from the doldrums. Your mandate is divine and no avaricious and envious person can take your eyes off the track. Your rejection of the “half-hearted “congratulatory message is instructive as you have more than a thousand reasons to do so. Notwithstanding that, I urge you to continue with that spirit of reconciliation and love even as they spiritedly preach hate against you. This is not unconnected to the fact that your victory is truly divine and defies political gravity.

May the empathy and love you have displayed so far continue to be the compass that shall guide you in the spirit of “In God We Truly Trust” slogan as we celebrate this victory from the good Lord.