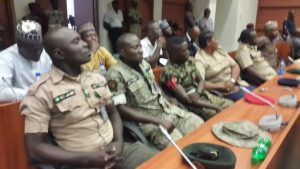 By John Iwori in Abuja

Stakeholders in the maritime industry have kicked against the passage of the propose Maritime Security Agency Bill 2017 into law by the National Assembly.

The bill which is in many ways similar to the provisions of the Nigerian Maritime Administration and Safety Agency (NIMASA) Act 2007 is otherwise known as the MASECA bill.

Speaking yesterday in a public hearing which took place in Conference Room 034, National Assembly Complex, Abuja, the stakeholders took turns to give reasons why the bill should not be pass into law by the legislators.

The public hearing was organised by the House of Representatives Committee on Maritime Safety, Education and Administration which has Hon. Umar Mohammed Bago as its Chairman.

Others are the Director of Procurement, Federal Ministry of Transportation, Mallam Shehu Aliyu; Lagos base maritime lawyer, Mr. Mike Igbokwe, SAN; Engr. Emmanuel Ilori; Nigerian Shippers Council (NSC); Maritime Workers Union of Nigeria (MWUN); Chairman of the Nigeria Seafarers Welfare Board, Otunba Kunle Folarin and the National President, Nigeria Merchant Navy, Officers and Water Transport Senior Staff Association, Comrade Alalade Mathew.
The Minister of Transportation, Right Hon. Rotimi Amaechi was the first to throw the first salvo when he declared emphatically that the MASECA Bill should not be pass into law as its provisions amount to duplication of the functions of NIMASA.

Amaechi whose position paper was read by Aliyu having turned back at the main gate of the National Assembly as a result of the uproar generated by the mass defection of legislators at both chambers of the National Assembly made it clear that the establishment of a similar government agency to NIMASA would create confusion in the administration of the maritime industry.

He also argued that passing the MASECA Bill into law would not only create another burden on the finances of the Federal Government but also stultify the growth of the shipping sector of the economy.

Continuing, he said: “NIMASA is well structured with a reservoir of expertise to manage, supervise and protect the maritime industry. This therefore has both intended and unintended consequences for the administration of the maritime sector. Allowing two parallel agencies to operate within the same sector will most likely create confusion in the industry.

“In most cases, these are deliberate provision in the bill to either emasculate the well-structured operation of NIMASA or completely makes certain provisions of NIMASA ineffectual”.

On his part, Omatseye warned against the promulgation of the MASECA Bill into law, pointing out that it would create more problems for both the maritime industry and nation’s security agencies.

The former NIMASA helmsman also went into memory lane giving a historical insight on the various times the MASECA Bill has come up and died in the National Assembly in the past, even as he wondered the reasons behind the present frenzy to pass the bill into law.

In his contribution, Folarin stated that since maritime business is international, if the bill is passed into law for any reason, it will make Nigeria a laughing stock before the comity of maritime nations.

The Nigerian Shippers’ Council (NSC) on its part said it was not in support of the passage of the bill just as it maintained that it preferred a robust collaboration with the apex maritime regulatory authority as well as the Nigerian Navy.

Many other contributors also aligned themselves with the position taken by the minister in spite of the support of some persons and groups outside the maritime industry for the passage of the MASECA Bill into law.

Those who support the passage of the bill include Captain James Falabiof OJAF Marine Consult; Vigilante Group of Nigeria; religious organisations, as well as the traditional rulers from Imo, Delta and Katsina States.

Bringing the public hearing to a close at 3:10pm, Bago promised to present the positions taken by the various contributors to the House.

The Chairman of the committee also promised to call any stakeholder to make further insight into their submissions if the need arises in the course of the legislators’ assignment.

Faces of Personalities at the one day public hearing on the propose Maritime Security Agency Bill 2017 which took place in the Conference Room 034, National Assembly Complex, Abuja yesterday.