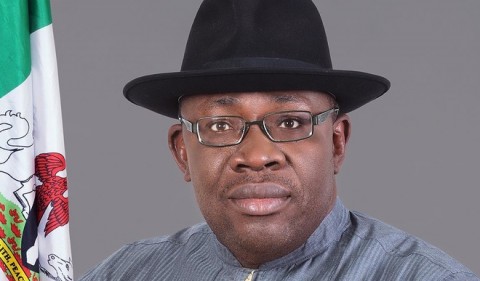 Former President Olusegun Obasanjo has given the Bayelsa State governor, Hon. Henry Seriake Dickson pass marks in his administration of the oil and gas rich state.

The elder statesman who spent three days attending several activities and unveiling several projects completed by the restoration government of Dickson gave the administration a pat on the back for what he has done to change the landscape of the state.

The activities and the unveiling of the numerous projects within and outside the state capital Yenagoa were earmarked to herald the sixth year administration of the Dickson administration.

Speaking in the ancient city of Kaima famous for the birth of the revolutionary Niger Delta activist, late Isaac Adaka Boro, the Kaima Declaration and the Ijaw National Academy (INA), a model educational institution for the education of Ijaw sons and daughter, Obasanjo hailed Dickson for the steps he has taken in the last six years to develop the oil and gas rich state.

He specifically commended Dickson who is fondly called the “country man governor” by his admirers for the policies and programmes he has executed to improve the lives of the people of the state since he took the mantle of leadership over six years ago.

According to Obasanjo who many Bayelsans still remember for the destruction of Odi, the sleepy coastal town where some militants abducted and killed a serving police officer in the wake of the militancy that rocked the Niger Delta region over a decade ago enjoined the governor not to rest on her oars but to do more for the people of the state.

Apparently aware that the governor’s opponents may not agree with him on the 60 percent he gave the Dickson administration, Obasanjo enjoined him to always ensure that he justify his conscience and His God in the formulation and execution of his administration policies and programmes.

His words: “In every step you take, justify your conscience and the almighty God. Do your work as a governor in such a way that when 10 Bayelsans gather, not less than 6 of them will say, you have done well. To me, 60 percent is a pass mark. This is because you cannot satisfy everybody. Concentrate on legacy projects that will stand the test of time”.

Addressing the people of the state on the side lines of an interactive programme tagged “A Day with Bayelsa Future Leaders” which took place at the INA, Kaima at the weekend, Obasanjo said: “I must tell you, the people of Bayelsa State are lucky to have a performing governor in the saddle. He has done well in infrastructures, agriculture, education and health. What you need to do is to give him the support and co-operation to enable him do more in the years ahead”.

Commissioner for Information and Orientation, Daniel Iworiso-Markson said Obasanjo’s visit to Bayelsa was a rare privilege and a great honour to the government and people of the oil and gas rich state.

According to him, the historic visit will remain memorable in the annals of the state while noting that‎ the former Nigerian leader came despite his very busy schedule.

The Commissioner also commended immediate past President, Dr. Goodluck Jonathan and his wife, Patience for hosting Obasanjo in their country home in Otuoke.

He also applauded ‎the leadership of the Peoples Democratic Party (PDP) led by the National Chairman, Prince Uche Secondus for taking part in the grand rally which saw over 6, 000 members of the All Progressives Congress (APC) returning to its fold and the unveiling of the magnificent Grand Pavilion and Boat Club, Oxbow Lake.

The Bayelsa State Council of Traditional Rulers‎ led by the chairman, King Alfred Diete-Spiff, civil society groups, professional bodies, youth and women association, past leaders, top government functionaries and other notable citizens of the state as well as Bayelsans in general were not left out in the commendation list of the state government.