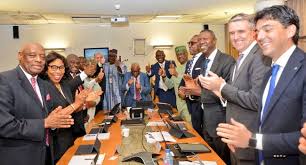 *Project to be completed in 5 Years

The certainty of the much awaited project is coming on the heels of the shareholders’ votes to expand the project in line with Nigeria’s quest to increase its production by 35 percent and its competitiveness in the global LNG market.

The Final Investment Decision (FID) which was announced by the NLNG has been delayed for 12 years and it is expected to increase from 22 metric tonnes per annum (MTPA) to 30 MTPA.

Speaking during the special board meeting where shareholders took the Final Investment Decision (FID), the Group Managing Director of the NNPC, Mr. Mele Kyari, stressed that the FID will generate $20 billion net revenue to the Federal Government; provide at least 50,000 direct and indirect jobs.

His words: “We have decided to proceed with the Train 7 project today. It is an important day. It is a show of confidence that investors can put money into this project. This is a gateway to more investment in Nigeria. We will take steps to get to Train 12. There is an opportunity to do this. NLNG is one of the most successful ventures in Nigeria.”

The expansion which is expected to attract $10 billion in foreign direct investment in the next five years, shareholders promised to build more trains and increase Nigeria’s LNG capacity.

The Managing Director, NLNG, Mr. Tony Attah, expressed gratitude for the development, stating that there will be a further reduction in gas flare.

He earlier stressed that the Train-7 project will take at least five years after the FID and will result in an increase in NLNG’s market share in the global LNG industry.

“NLNG has been bringing huge value to Nigeria through taxes and dividends. With Train 7, the value will grow. Train 7 will open the progress gate and be the catalyst for what will be Trains 8, 9 and 10 in the nearest future. There will be a further reduction in gas flaring to much below the current levels, over 10,000 direct jobs as a result of Train 7”, he added.

A consortium comprising Italian firm Saipem, South Korean Daewoo Engineering, and Japanese Chiyoda is to build the $7 billion Train-7 LNG expansion plant. An additional $3 billion worth of investment on upstream gas development will be spent to meet the expected demands of the new capacity.