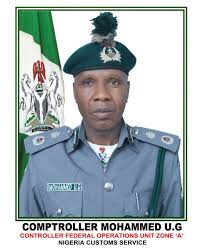 The Nigeria Customs Service (NCS), Federal Operation Unit (FOU), Zone A, Ikeja, Lagos said it intercepted contraband which duty paid value (DPV) was put at of N1,618,177,661.50 in January 2017.
This was disclosed by the Customs Area Controller (CAC), NCS, FOU, Zone A, Comptroller Mohammed Uba in a chat with journalists in Lagos.

He stated that apart from the seizures, the unit also recovered the sum of N91, 366, 436. 00  from underpayment.
Among the seizures were 31 assorted vehicles, 8,400 bags of rice, concealed in 14 trailers, 1,652 cartoons of frozen poultry products and 835 jerry cans of vegetable oil.
Others were 10 sacks of Indian hemp, 2,208 pieces of used tyres and 159 bales of used clothing.
The vehicles which were detained by the Customs Unit were four Rolls Royce, one Porsche Panamera, one Jaguar, one Bentley, two Lexus jeeps, two G-Wagon and one Toyota Land Cruiser, five Toyota Corolla and seven Mercedes Benz.
The 31 vehicles which are mostly 2017 model have a DPV of N1,429,953,941.50 only.
Uba said that while some of the vehicles were taken from car shops at Parkview Estate, Victoria Island, Banana Island, Ikeja and Maryland, others were intercepted from smugglers along Ijebu Ode axis of the Lagos – Benin Expressway.
He called on owners of the vehicles to come forward with valid customs clearance documents to claim them failure of which the cars will be subject to forfeiture to the federal government.
According to the Customs Chief, the action of the customs operatives was in line with the provisions of the Customs and Excise Management Act (CEMA), Cap 45, laws of the Federation of Nigeria. With the provisions of this Act, the NCS has the powers to search premises and recover goods which were smuggled into the country without payment of duties.