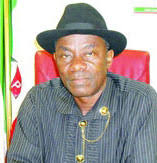 The Grass Root Movement for Sustainable Development, Ogbia Local Government Area of Bayelsa State has hailed Senator Nimi Barigha Amange for the strides he made while he was in office.

It also asked him to present himself in leading his people once more in the 2019 general election.

Besides representing Bayelsa East Senatorial District in the sixth and seventh assembly in the upper chamber of the National Assembly, Amange had at various times occupied key positions in his political career.

The group while on a visit to the senator in his country home at Ogbolomabiri, Nembe Local Government Area of Bayelsa State hailed Amange for using the various positions that he has occupied to better the lot of his people.

In a keynote address made available to Maritime Bits and presented by the leader of the group, Elder Wilson Abel, it specifically hailed the senator for the strides he made while he was representing the people of Bayelsa East in the National Assembly.

“We are a body comprising grass root youths of Ogbia Local Government Area of Bayelsa State and we wish to say thank you in the first place for accepting our request for this historic visit. This visit is predicated on the great impact you have made in the lives of youths and society at large. We have therefore come to say thank you for making the lives of youths meaningful. May our Almighty God bless you bountifully in Jesus name!

Describing Amange as a “great philanthropist and astute politician with uncommon humility and a man of peaceful disposition”, the group also enumerated some of his achievements in the area.

“You were the first to bring lime light to our area when you were appointed as the Chairman of the then Niger Delta Basin Development Authority. While in office, you gave employment to so many youths. When you contested and won the Bayelsa East Senatorial seat in 2007 you graciously fulfilled your electoral campaign promises by putting up qualitative representation as you were fondly called the voice of the Niger Delta. You also initiated and executed both human and physical capital developmental projects that greatly impacted on the lives of our people”, it added.

According to the group, Amange sponsored the training of so many youths in various vital skills and knowledge; registered so many students for WAEC and JAMB examinations and right now most of the beneficiaries are graduates. You initiated and constructed a concrete bridge at Otuegila, across the Kolo Creek to link Amorokeni and some communities in Rivers State.

It also stated that Amange facilitated the award of an electrification contract from the Oloibiri Oil well through Idema to Agrisaba though the contract was not completed; as the Vice Chairman, Senate Committee on Interior, you sited a Federal Prisons Institute (Borstal Institute) at Ogbia Town; when you were appointed as Pro-chancellor/Chairman, Governing Council, Federal University of Petroleum Resources Efurun, Warri in Delta State, you gave employment to so many Bayelsans.

The Grass Root Movement for Sustainable Development, stated that these were projects Amange initiated in Ogbia Local Government Area alone, point out that they were yet to mention the ones initiated and executed in the two other local government areas that make up the Bayelsa East Senatorial District. They are Brass and Nembe Local Government Areas.

According to the Grass Root Movement for Sustainable Development, Amange is a man of inestimable values with purposeful leadership qualities that have won the trust and confidence of the people of Bayelsa East Senatorial District.  You are therefore the man we need at this critical period of the Bayelsa East socio-economical and political development.

Giving insight into the uniqueness of the Bayelsa East Senatorial District, the group said: “There is no gain saying the fact that our senatorial district is blessed by God. History has it that crude oil which has sustained this country for so long was first discovered in commercial quantity in 1956 at Otabagi in the Old Oloibiri District, the first military administrator of the old Rivers State was from Bayelsa East, the first civilian Governor of the old Rivers state also came from Bayelsa East, and the first President of the Federal Republic of Nigeria from the Niger Delta region came from our senatorial district. Our dear Senator, you can see that God has always given us first in terms of blessings, but why are we the least in terms of development? Your guess is as good as ours”.

It argued that the Bayelsa East people can no longer afford a situation where its destiny will be given to persons who will not be able to deliver the dividends of democracy to the people at the grass root.

Continuing, it said: “We know you. You have gone there. You have been tried, tested and proved to be faithful, reliable and dependable. We therefore need you to come and consolidate on your previous achievements. Since you left office, the senatorial district has suffered from poor representation. We are therefore pleading and soliciting with you to come out gallantly as a war lord and contest for the 2019 Bayelsa East Senatorial election. We are very optimistic that you will surely win”.

It expressed optimism that the senator would give a positive response to what it called “a clarion call to service” in the weeks ahead.