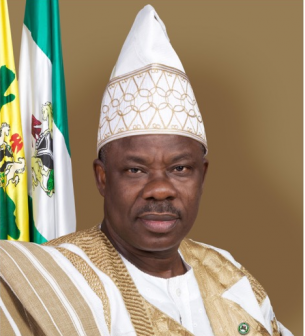 The recent resignation of the erstwhile Finance Minister, Kemi Adeosun over ‘forged’ NYSC Exemption certificate scandal has opened more details on the power tussle and betrayals she may have experienced on the job.

A reliable source has fingered Governor Ibikunle Amosun of Ogun state as being responsible for the certificate in Adeosun’s possession when he employed her into his cabinet.

The source further stressed that Adeosun was not aware that her NYSC Exemption certificate was forged until Premium Times broke the story about 3 months ago and she quickly approached Amosun for the way out.

“Governor Amosun cannot claim total ignorance over this NYSC certificate scandal. He did not invite Kemi Adeosun from England to Nigeria, he only headhunted her from Wale Edun’s company to become a Finance Commissioner in Ogun state,” the source claimed.

“The controversial NYSC Exemption certificate under question was quickly manufactured through illegal means during the Ogun State Assembly clearing process for all Governor’s political nominees.

“In all fairness, Kemi was not aware that the certificate was forged.I can tell you this bitter truth.

“When Kemi worked with Wale Edun, nobody asked for her NYSC certificate because she was over 30 years of age when she started work with Denham and later became the company’s Managing Director.

“From Adeosun’s resignation letter, she did not apply for a Nigerian passport until her 34th birthday when she officially became a Nigerian citizen by parentage.

“Kemi Adeosun in her letter of resignation stated that all those associates she trusted so much betrayed her. That’s a loaded conscience-pricking message for Amosun and others who stabbed her at the back for whatever reason.”

The source also hinted that Amosun recently approached Presidency over the recent Paris funds (N16.7 Billion) allocated to Osun state and questioned why Ogun state was not involved in the sharing of the Paris funds.

President Muhammadu Buhari reportedly told him to contact the Finance Minister, his nominee, to find out details but Amosun told Mr.President that he has not been speaking with Adeosun for close to 3 months now.

“Nigerians have now seen the final outcome as Adeosun resigned from Buhari’s government and quickly travelled to England, her place of birth to start a new life.

“If Kemi had obtained the NYSC Exemption through official methods, she would have replied the Premium Times within 24 hours of the leakage that her certificate is 100 percent genuine.

“She was silent for over 3 months until her latest resignation. She was totally confused as any human being.

“President Buhari advised Kemi to resign because Amosun who nominated her as Finance Minister is no longer in good terms with her, and also another ‘soft-landing’ to bow out honourably over this NYSC certificate scandal.”