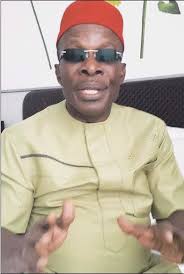 *Nigeria Customs Service is the complainant, the prosecutor and the judge

*CRFFN is a dream that went asunder.

Chief Ernest Elochukwu is the erstwhile National President of the umbrella body of licensed customs agents in the country, the Association of Nigeria Licensed Customs Agents (ANLCA). In this incisive exclusive interview with Maritime Bits, Elochukwu who is the Managing Director and Chief Executive Officer (CEO) of Nestello Gateways Group bares his mind on a number knotty issues in the polity, Nigeria Customs Service modernization project, maritime industry and beyond. Excerpts.

Against the backdrop of Nigeria’s 60th independence anniversary, has Nigeria fared well in the maritime sector of the economy?

Generally Nigeria as a country has underperformed in almost every aspect hence it may sound like stating the obvious that Nigeria has not fared well in the maritime sector in the last sixty years. A lot of good intentions had been brought to the public domain by various government regimes which had seen innumerable committees set up and resources poured in, yet nothing substantial had come out of all these.

Why do you think there had been these failures despite the efforts?

Nigeria typifies this situation that was once captured in a folklore concerning a community of rats being hounded by a malevolent cat and even when it was agreed that the only way out was to hang a bell on the cat’s neck so that all rats would be warned to hide whenever the cat comes calling, the big question became; who will bell the cat? At various times, lofty ideas have been put forward on how to make the maritime sector be efficient and effective as a vibrant arm of the economy but such always end up as recommendations filed away in some archives. You will recollect that during the very first stakeholders meeting convened by the current Minister of Transportation in his first tenure, one of the resolutions was that he should cause the various reports to be retrieved from the archives and the recommendations reviewed and implemented. The way things have been going doesn’t suggest that such was even done.

As a seasoned licensed customs agent, do you think the Nigeria Customs Service modernization project is the right away to go in attaining the purpose for which the service was established?

The Nigeria Customs Service (NCS) has been on a rollercoaster with regards to the various projects and measures it has been coming out with regards to discharging its mandate. The modernization project which involves deployment of information communication technology (ICT) in its various functions especially in cargo clearing has been unduly skewed to cause misery and hardship on the participating stakeholders especially the importers and licensed customs agents. First, the NCS lobbied and got an approval to take over the contracts of the then service providers who were running the risk assessments and scanning services. Now, the NCS is the complainant, the prosecutor and the judge! But the underlining issue is that the real modernization which is in the human person has not yet started and until it does, all have been mere window dressing.

What is your take on a recent report that says that it is cheaper to ship a container load of cargo from the People’s Republic of China to Nigeria than to carry the same container from Lagos to the Eastern part of the country?

Of course, the report is as true as truth can be and once more it reflects the sad situation we have consciously put ourselves as a country. When it costs about 3,000 USA dollars or less to ship a 20 feet container from a Chinese port to Lagos and it costs 1.5 million naira to truck the same container from Lagos port to Port Harcourt as some of my clients have been paying, does it not sound incredible? This is not unconnected with the fact that we have a system of government administration that has refused to improve. It is a system that does not recognize the need for projecting into the future and planning for tomorrow which has resulted in Apapa nay Lagos gridlock.

Many stakeholders have patted the Federal Government on the back for the recent berthing of the largest container ship to ever visit Nigeria at Onne Port Complex, Rivers State. What other things do you think the government can do to make the ports situated in the Eastern part of the country to be attractive to shipping lines and other port users?

Berthing the largest vessel at Onne Port though on a demo voyage is certainly a feat since it has also put certain issues into clear perspective. For one, the issue of whether the channels in the Eastern waterways are wide and deep enough to take larger vessels has been put to rest. It also put to rest the issue of drought or depth. However, the authorities should look at other areas of inside and outside port infrastructure to ensure that Apapa debacle does not replay in the Eastern part of the country.

You have been accused of fighting a proxy war in the Association of Nigerian Licensed Customs Agents (ANLCA). A recent report specifically accused you of using the National President of ANLCA, Mr. Anthony Iju Nwabunike to get at the former Chairman, Board of Trustees (BOT) ANLCA, Chief Henry Njoku. What is your take on this?

Being accused of fighting Chief Anthony Iju Nwabunike as a way of getting at Chief Henry Njoku is the most absurd accusation I have ever heard but I am not surprised because it is only amongst Nigerians maybe that you can hear that a bigger person is fighting a smaller person. If I may ask for what purpose or intent? What is the motive of the fight? To become smaller, may be? Why would I need to fight Nwabunike or Njoku? Having been the National President of ANLCA, I have attained the pinnacle of executive positions which can never be surpassed. And I am proud to beat my chest that I gave ANLCA the greatest gift of service that would never be forgotten. The only thing is that in a country where charlatanism has become a culture, hallucination has passed for postulation of wisdom. I decline to say more for the sake of the survival and relevance of ANLCA but suffice it to say that those who had always benefited personally from ANLCA should show respect to the spirit of the association.

As a former National President of ANLCA who recorded many strides in office including taking the association to the Presidential Villa, Aso Rock for the first time, what do you think can be done to address the lingering crisis in the association?

When you ask me of what can be done to address the lingering crisis in ANLCA, you put me in a tight corner. As per your last question and the stories being maliciously peddled around, I have been made an issue in a matter that I am at best an observer. But, in the spirit of the saying that great minds discuss ideas while lesser ones discuss people, I will venture a suggestion with a story. Sometime last year or so, a meeting was held in Protea Hotel Maryland Lagos courtesy of efforts by Alhaji Sanni Shittu and some lawyers were present. In his submission, Iju said the cause of the crisis was that I led five other trustees against him for defeating our preferred candidate. I told the audience that if there’s anyone to brag about winning an election, it should be me because I won the most keenly contested and expensive election in the history of ANLCA but that I had the good sense to reach out to the man who contested against me in hand of fellowship. The simple issue in the ANLCA crisis is rising up to the demands of leadership.

You are one of those that played pioneering roles in the Council for the Regulation of Freight Forwarding in Nigeria (CRFFN). Do you think the council has done well since its establishment?

CRFFN is a dream that went asunder. And I must add that the spirit that has made CRFFN to become a disappointment is also present in the current ANLCA crisis. Selfishness appear to be second nature to some persons that in all situations, it’s either they are benefiting selfishly in a general patrimony and there’ll be peace and tranquility but they are ever ready to rock the boat whenever they perceive themselves not in control. The concept of CRFFN is for a professional council in the mold of the Council for Registered Engineers of Nigeria (COREN), Nigerian Medical Council (NMC) and other sundry councils seeing to the professional standards of the various disciplines of human endeavours. But what do we have today in CRFFN? A parastatal under the Federal Ministry of Transportation where council members do not bat an eyelid if the Chairman of the Council is a non-professional political appointee so long as they have vehicles that show they are “in government” with other pecks of office. It is simply disappointing and even disgusting, to say the least.

What is your parting short for our readers?

A parting shot? Our country and the institutions in her will only start the recovery and march to greatness when her constituents (human persons) start being selfless in their thoughts and actions. That is the principle upon which the great nations of the Earth were built to greatness.